Better Together is the name of a drama project which was devised by Ablevision Productions in association with Quintessence Theatre Company.

Ablevision and Droichead Arts Centre are delighted to announce a new collaborative partnership, whereby the Centre provides space and support for all Ablevision projects, and advises on long term strategies for the organisation.

The fruits of this work will be on display at the Droichead on Friday February 21st next when they will stage a co-production called Better Together.

Over a series of collaborative workshops Quintessence Theatre, the Theatre Company in Residence, at Droichead Arts Centre, have joined forces with Ablevision to share some of their favourite theatrical storytelling techniques, and together have created a short piece of movement, drama, tableaux, and multi-media, meditating on the universal theme of friendship called Better Together.

Ablevision is an organisation that works with adults with intellectual disabilities through the arts, and it focuses on collaborative projects between participants and professional artists.

Projects to date include:

Films:  Joe and Sarah, A Crack in Everything and Little Fairy Tree:

Dance with Cathy O’ Kennedy, Bodies in Motion which was premiered on stage at their International Film Festival.

Founded in 2015 as the inaugural Theatre Company in Residence of the An Táin Arts Centre, Dundalk, and now the Theatre Company in Residence of Droichead Arts Centre, Drogheda, Quintessence dedicates itself to exploring the human condition through the most theatrical means available to us: the actor themselves, their imagination, and embracing the live relationship between actor and audience.

We believe in play; we believe in collaboration; we believe in amplifying voices not always heard; and we believe in the democraticisation of art: that it should reach people beyond the cultural hubs of large urban populations. We believe that great work can be made from modest means if you have those quintessential elements: a story, a performer, and audience.

We harness the full potential of the actor’s body through heightened physical approaches, mime and a playful ensemble. We seek to surprise, move and provoke our audiences, entertaining them and creating dynamic, innovative, visceral, compassionate story-telling that finds the new in the familiar, and touches on urgent issues at the heart of Irish society here and now.

Funded by the Creative Ireland Programme

“The greatest gift of life is friendship.”

“Friendship is the only cement that will ever hold the world together.” 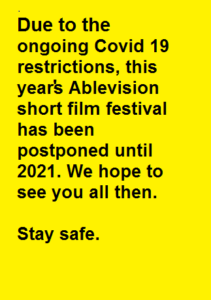 Your support is greatly appreciated

Ablevision Ireland is a media production and training company for people with Intellectual Disabilities.

Our production crews are empowered to speak up for themselves and to challenge expectations about what they can achieve by making their work visible and valued by the wider community.

Through training and encouragement, our crews learn that they can and will be role models for others with intellectual challenges.

At Ablevision Ireland we believe in the talent and power of our production crews to produce inspirational work that informs and enriches society as a whole.